IT REALLY IS THE BEST OF ALL THE PRIVILEGES

Yaya M., has her hand out. However, all she’s asking for is the same thing that seems to have driven some of the most successful people for hundreds of years in America – “White Privilege”. To reach her financial goal of being able to successfully attain the vaunted privilege of um… the whites, she’s set up a GoFundMe.com page. The goal, $135,000 I’ll give you a moment to consider how many white people have reacted.

Oh, you don’t need a moment, because you’re one of the twenty people who read RaceMan? Yeah, some people went crazy. 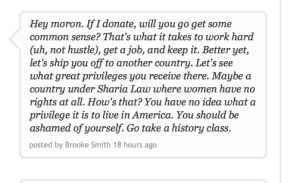 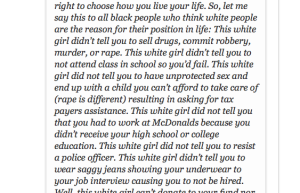 Those are the tame ones.

The saddest thing about this is really that no one can take a joke anymore. I don’t know Yaya M., but this is a masterful stroke of social and political satire and the most intended audience seems to totally miss the point. No wonder there’s only one black woman on Saturday Night Live.

If there was any question this is satire, read the statement from Ms. M’s fundraising campaign: 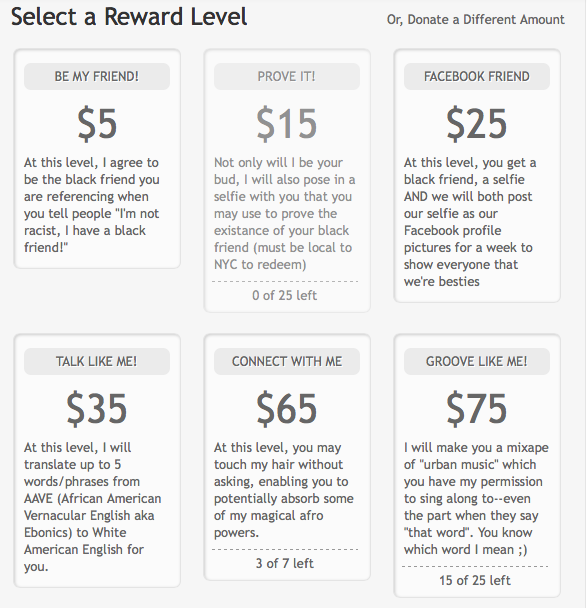 The gifts for donation alone are hilarious and bear emotional punch for both black and white American. If that were written in The Onion, no one would blink and it would have a shot at going viral. We would not be looking for yet a reason other that calling another black woman lazy.

And for the sake of argument, I’m gonna get all swoll up and say, “What if wasn’t a satire?” The points she makes are still relevant and people have crowd funded for stupid things all the time, not just potato salad.

For people who do not think we live in a world where white privilege exists, satire like this only reads as insult. When it gets to the point that some of them have to respond in such a vitriolic manner, you’ve clearly touched on something personal.

Perhaps Ms. M’s, statements made these particular white people realize that there is white privilege and they aren’t getting any because of their own limited social and economic circles. Watching a black woman call out the system and seemingly have a shot at getting, well, what could be considered her “reparations” might piss them off.

It could be people who are recipients of white privilege and haven’t noticed or are in denial about it. To believe it, means that maybe they are contributing to keeping others from having a fair shot and that makes them a bad person. No one wants to be a bad person.

While Yaya M does have her supporters, it’s unfortunate that so many have missed the joke and the opportunity to open their minds and challenge the status quo, not an aspiring black woman trying to get us to look at the world just a little differently.