Comparatively speaking, last week was almost calm, when weighed against the drama of the last few weeks. In Ferguson, Missouri, we saw the implementation, then removal of a curfew; the deploying, then recall of the Nation Guard; and the arrival of Attorney General Eric Holder.

While some credited Mr. Holder’s arrival in Missouri as one of the main reasons for calm, the people of Ferguson now wait to hear what, if anything, will come from the Grand Jury that has been called to decide Officer Darren Wilson’s fate.

It’s been reported that the Grand Jury has three African Americans, a man and two women. The remaining jurors are six white men and three white women. It would seem, that even the juries in Ferguson don’t match the demographics of the town. Hardly a surprise anymore after we’ve already learned that there are nearly no persons-of-color in city government, on the school board, or police force. That would be like going to a wedding and being surprised there’s cake. Now is also the time to mention that nearly $240,000 has been raised for the defense fund. Presumably, mostly by people like this: 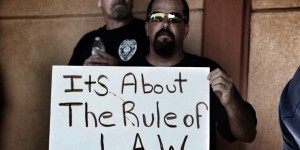 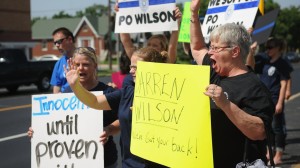 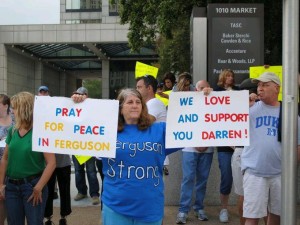 Seriously, does that lady’s shirt read “Ferguson Strong”? That’s just cold-blooded and wrong on so many levels. Hopefully none of them are in the Ferguson jury pool.

While Ferguson and the world waits, most have been ghostly quiet about this police-involved shooting of Kajieme Powell, that happened just a few miles away. Powell, who had just stolen drinks from a convenience store, was confronted by police, in front of the store, minutes after someone called 911. Warning: Graphic video below:

The prevailing logic in this case seems to be that this is a “suicide-by-cop” and should not be held to the same standard. However, if the standard we are talking about here is overly eager cops who fire too quickly, then this meets that standard in bunches. The officers had their guns drawn IMMEDIATELY. The entire incident is less that twenty-five seconds.

Though, Mr. Powell’s murder is horrible, that not even the MOST horrible police news of the week.

Forney, Texas – Police pull over Kametra Barbour’s car. Inside the vehicle with her are four children, two belong to Ms. Barbour, the others are her godchildren. Police had just received word that “four black males” had been seen in a car, pointing a gun out of the window. The car the police were looking for was a beige Toyota, Ms. Barbour drives a burgundy Nissan.

The police say this was an “accident”, but what kind of mistake is that. Beige to burgundy? Four black men become one black woman and children? That’s not a mistake. That’s profiling. If you already have the parameter for your search, why the hell would you need to search a random burgundy Nissan, unless of course, there was a random black person driving it.

Here’s is the video of the traffic stop, from the dashboard cam of the police cruiser, it’s heartbreaking.

Do you see Ms. Barbour’s six-year-old son? The boy who exits the car with his hands up? The boy who is terrified more than most of us will ever know fear? The boy, who if he were twelve years older, might have been dead in that moment? That boy knows exactly how to deal with police. He’s been schooled well and as scared as he is for his mother and his family, what you are actually watching is the coming of age for millions of blacks in this country. The progression goes thusly: Why did you stop us, we’re the good guys! Then: An authority I’m supposed to trust is hurting someone I love, for no reason other than race. Then: The authorities are separating me from my loved ones. Then: Who will be going to jail today? Then: Will it be me?

Ms. Barbour has said that her son “didn’t cry” after the traumatic traffic stop. It bothered her that he was so emotionally drained from it and that he acted more like an “18 year-old than a 6-year-old”. Unfortunately, after a traffic stop like that one, he just may be.

As Danny Glover said in Silverado:

It’s been a lot of fun watching the Little League World Series. I can’t remember a year when there were so many young black players. And though, as of this writing, the Jackie Robinson West Little League team of Chicago doesn’t look like they’ll pull out the world championship, they were more than heroic in their campaign for a national title. The first all-black Little League squad to get a championship, let alone make it to the finals, it’s refreshing. In a hard-driving marketing world that pushes basketball and football to black kids like they’re the only alternatives for sport, it’s great that so many young men found baseball. There really isn’t a better way for a young man to spend their summer days.

Or young lady for that matter… 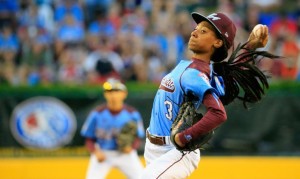 Her name is Mo’ne Davis and though her team was eliminated, she was essentially the face of the Little League World Series for the first few days. Even my daughter, who never watches baseball, was eager to talk about her and that made me feel good. I’ve often wondered why there aren’t more mainstream co-ed sports. It would seem that baseball would be a natural fit for that kind of experiment. That there is no such thing as professional woman’s baseball is strange, considering how many women are fans and wasn’t A League Of Their Own huge back in the day? Huge!

Obviously, there are amazing female athletes, but their achievements are often diminished, because they are playing the “girls version” or indeed, against other “girls”. Miss Davis, though a child, illustrated something that could bring about the best in acceptance of women as equally talented athletes. Her accomplishments were measure in that she could pitch as well, if not better than the others in her league. Her stats weren’t given an asterisk or put in the “girl” column(nor are any of the young women who play Little League, and there are MANY). Her stats, were simply her stats. The measure of any great player.