It was HOMICIDE. That was the principle finding by the New York Medical Examiner in the Eric Garner police brutality case. On Friday, news broke that the illegal chokehold used on Mr. Garner during his arrest, was directly responsible for his death. It was murder. It was a lynching. And now, we wait to see the process of “justice” in New York. In this case, it will mean that NYPD Officer Daniel Pantaleo and the others police involved, also the EMT workers will likely have to face a Grand Jury. In Staten Island. Historically speaking, it is not likely the Grand Jury will indict any of the authorities involved and we’ll soon find ourselves angrier than we are now.

What’s interesting to me has been the response of some, who still claim that Eric Garner should have somehow “known his place” or “not raised his voice” or “just kept himself in the house” as the primary reason for this tragedy. What will those people say now that the medical cause of death is homicide, and not simply just a black man who doesn’t know what to do with is time? To the same people who criticize people like Reverend Al Sharpton for fighting for the Eric Garner’s and Trayvon Martin’s of the world, by bringing up Tawana Brawley as proof of his “duplicity” only expose themselves as being blind to the actual problem, but also unable to not only learn from mistakes, as Sharpton clearly has. Last week, photos were released of Rosan Miller, the pregnant mother from Brooklyn, whom was also put in a NYPD illegal chokehold. Her crime? Grilling on her front porch. 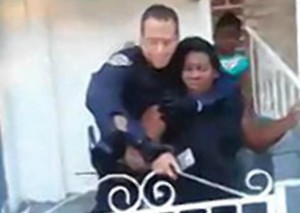 Should she have also “not raised her voice” or “known her place” while on her on property? Without photographic record of Ms. Miller’s or Mr. Garner’s case, they would likely just be swept under the rug. To deny that, you may as well deny the incidents happen at all.

When Officer Pantaleo and others were either suspended or placed on modified duty last week, the NYPD union called it a “kneejerk reaction”. What do they say now that Mr. Garner’s death has been ruled a homicide? Well, Michael Palladino, President of the NYPD Detectives Endowment Association, told cops to “never let your guard down”, in regards that civilians will now be likely videotaping them. Not, “never kill an unarmed suspect, begging for his life”. “Never let your guard down.”

In the cases of Mr. Garner and Ms. Miller, specifically, they’ve fallen victim not only to the NYPD’s widely regarded stop-and-frisk policy (that despite DeBlasio’s campaign promises and appeals from his son could not vanish), but also the department’s “broken window” policy. For the unaware, “broken window” is the NYPD policy of harshly and strictly policing small crimes – subway fare beating, selling loosies, loitering – in an effort to catch big criminals. I suppose with the idea being that a hardened criminal does anything and everything at random times, so if you stop the small crimes, they’ll never get to the big crimes. It makes absolutely NO sense, and is about as successful at catching major criminals as Kim Kardashian is likely to win an Oscar.

Jay-Z and Beyoncé may be splitting up after their current On The Run tour. This is devastating news for black fandom everywhere. Barack and Michelle Obama, Jay and Beyoncé…um Z. Those two couples embody all that is black royalty, to hear that we are losing half of our power couples?!? There’s just no reason to believe in this anymore.

That was the moment many of realized, “these two are HOT together” and they ain’t even together in the video! We just knew. That’s how right it was. Then there was that thing about Jay-Z saying he had his eye on Beyoncé since she was sixteen. Okay. Creepy, yes… But we all agreed to look the other way, because they were both adults now, right? They were stronger than Rihanna and Chris Brown, and Rihanna and Drake, and Chris Brown and Karreuche, and classier than Kanye and Kim. Until this:

This was the obvious end to people with eyes. You can’t go much further in a relationship after your sister publicly beats the crap out of your husband. No matter how great the Christmas gifts were, all future get-togethers are just awkward. In a year or two, as go showbiz romances, Beyoncé and Jay-Z will be involved with another high-profile superstar. When that happens, this romance will seem like a distant memory. If the Bey and Jay show does come to an end, I feel like it will only make us more eager to see whom they wind up with. Pop culture addiction is a morbid sickness.