You’ve probably seen it before. It’s one of the most triumphant and indelible moments in the history of athletics. April 8, 1974 Hank Aaron hit his 715th Major League home run, breaking Babe Ruth’s record. At the time it was an accomplishment not only of sports heroism, but also of extreme focus and perseverance, during what was one of the most traumatic times of his life.

When Mr. Aaron cracked that left field shot into the history books, it was at the end of a very long campaign of racism and bigotry that tried to block that from happening. For many, the idea of an African American being at the zenith of one of the most elusive records in what is arguably America’s most important sport, was too much to take. Mr. Aaron was harassed and threatened as he approached Mr. Ruth’s record. Some the hate mail he received (and saved) have become time capsules of hate: “I will shoot you…”, reads one “Dr. Mr. Nigger…” reads another, most famous for it’s salutation so bizarrely formal, and unmistakably ominous. It was a less tolerant and progressive time. So we were to think. 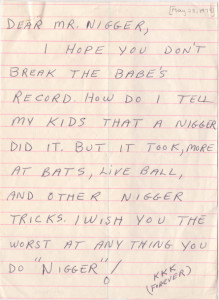 Last week Mr. Aaron defended President Obama in USA Today, while using what some have branded as “incendiary language”. Regarding opponents of President Obama, Mr. Aaron said, “This country has a black president, but when you look at a black president, President Obama is left with his foot stuck in the mud from all of the Republicans with the way he’s treated. We have moved in the right direction, and there have been improvements, but we still have a long ways to go in the country. The bigger difference is that back then they had hoods. Now they have neckties and starched shirts.” People immediately construed a comparison to the GOP and racists. Wanna guess what happened then?

Almost immediately people came out of the woodwork to send hateful emails to Mr. Aaron and The Atlanta Braves, for whom he is still affiliated. According to USA Today here’s an example: “Hank Aaron is a scumbag piece of (expletive) (racial slur)”, the message would end with, “My old man instilled in my mind from a young age, the only good (racial slur) is a dead (racial slur).” If that’s the tamest letter a sweet family paper like USA Today can print, we can be pretty sure that the missives only get more aggressive.

And for what? Mr. Aaron never actually compared Republicans to KKK, the writer of the article has been vigilante to point that out, yet that hasn’t stopped conservatives with nothing better to do than harass an 80-year-old man. After all the Mr. Hank Aaron has done and seen, you would think that by now he’s at least earned the right to speak his mind, without being told he should know his “place”. Mr. Aaron’s ultimate point in his comments was that we are not as “post-racial” as we are led to believe and his would-be bullies helped him prove his point.