LIFE IN THE PINK HOUSES AIN’T NO CRYSTAL STAIR

In the Louis H. Pink Houses, you have choices: You can ride the elevator. The elevators are small and dark. To be sure, in size of space, they are comparable with most apartment building elevators, but that is an illusion. In truth, there is only as much foot space as the trash in the elevator will allow. Trash, in fact, is welcome when compared to the alternative, a large, murky, nauseating puddle of urine. If you’re lucky, your eyes can just barely see all of this horror, because the light is covered in graffiti or “something”, or gone. You ride the elevator, hopefully not in the dark, usually with your breath held, hoping to whomever you pray to that the lift won’t stall or that other people won’t board, for fear of prolonging the ascension of despair. If the elevator is in service, and not being used as a bathroom, or drug den, or brothel, you have the choice of using it.

This is the Pink Houses as I remember them from my youth and yet I use the present tense, because it is also the Pink Houses as they still are. Nothing has changed in the sprawling complex since my family moved away many years ago. Many young men and women there still find themselves at the end of their ropes, and resorting to violence as a means to economic salvation, or worse – entertainment. Even more frightening than they, are the police. In my youth it was the NYC Housing Police, who had a small precinct on Loring Avenue. For many black men who live in the Pink Houses (or any NYC public housing), it is the police who can make life hell, or flat out end it.

Thursday night, Akai Gurley was shot by rookie NYPD officer Peter Liang . Liang and his partner were on a “vertical patrol”, a foot beat that goes from the rooftop of an apartment building, through the stairwell, to the bottom — ostensibly to clear out any vagrants. The stairwell at 2724 Linden Boulevard, was black as tar and had been for months. Liang, green not only had his flashlight out, but his 9mm gun drawn and unfortunately – for us to even be discussing this – his finger on the trigger.

Mr. Gurley’s girlfriend, Melissa Butler, had just finished braiding his hair, when they decided to use the stairs, because the elevator was slow. At that moment, Liang and his partner Shaun Landau, also a rookie, were descending the stairs. Officer Liang fired a shot that ricocheted off of a wall and into Mr. Gurley’s chest.

Akai Gurley, hearing the shot ran for his life and collapsed on the floor on level below. According to Ms. Butler, Officer Liang did not identify himself, nor did he offer aid to Mr. Gurley after he shot him. Now, Mayor DeBlasio calls this a “tragic accident” and the NYPD is reevaluating whether or not rookies should be partnered with rookies.

Living in NYC public housing is to be forgotten. It’s to live in a bureaucratic nightmare that neglects for months to replace lights in the hallways or clean urine from elevators. It’s living under the constant patrol of the NYPD who see you as a marauding enemy or in this case, target practice.

Most police officers do not patrol the neighborhoods in which they live. Because of that, many cops, it would seem by their relations with those communities, patrol people they fear. When you’re a cop, fear leads to bad choices and bad choices leads to death.

In 1976, my family moved to 1237 Stanley Avenue in the Louis H. Pink houses. For my parents, it was their first apartment, but what little pride they had at striking out on their own was quickly diminished by the sheer oppression of the environs. We never went out much, it was far safer to stay indoors and mind your own business. Even then, we knew that it took only the smallest of circumstances for any of us to end up like Akai Gurley. No one seems to remember the date we moved in, but I never forgot the day we left: March 1, 1986.

Earlier this year, for the sake of nostalgia, I took my daughter to my old neighborhood. While she enjoyed the playground, I must admit, a huge upgrade from the glass-strewn battlefield I was forced to play on, she was downright terrified when we actually ventured inside my old building. With trash and urine in the elevator, we only dared ride it going up. Going down, we took the dark stairwell to the exit. The entire time, my daughter clung to me tightly, terrified we could loose each other in the void of the squalor. 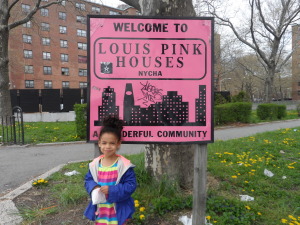 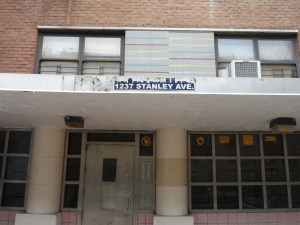 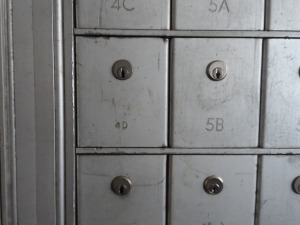 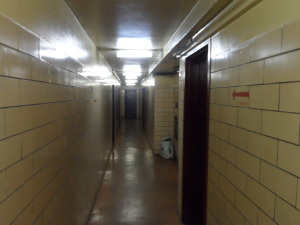 Despite this, we actually had a good day that day. However, I remember as we drove away from the Pink Houses, Ella asked me, “Did you like living there?”. I replied, “No, Ella, I’m not sure anyone does.”