In the same week that Renisha McBride got justice for her senseless murder at the hands of Theodore Wafer, another young, unarmed, black person has been shot dead. This time in Missouri. The shooter, a white police officer. Michael Brown: Another case of a young black kid who didn’t know his place. 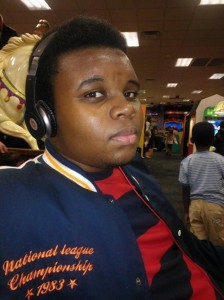 Saturday afternoon, Michael Brown walked through Ferguson, Missouri on the way to his grandmother’s house. In fact, shortly before his death, Desiree Harris, Brown’s grandmother, has reported seeing him walking to her home, from her car as she ran errands in the neighborhood. What turn of events lead from that to Michael Brown laying dead on the street for up to four hours, before his corpse was removed is unclear.

Witnesses say Brown had his hands up and was on his knees when he was killed. They also say that he had been shot before he was openly “surrendering”. Police say that Brown and an unknown at this time “other person” were in an altercation with police that lead to the death of Michael Brown.
Whether or not that is true, it hardly seems logical that the next step is to shoot a person who has their hands in the air. Unlike the latest high-profile police lynching, Staten Island’s Eric Garner, there has been no emerging camera phone footage of the slaying of Michael Brown. An investigation has begun, naturally within the Feguson Police Department, but the family of Michael Brown and the NAACP are asking the FBI to investigate.

Saturday night, as residents, family, and friends of Michael Brown gathered to protest they were met with police, and German Shepard K-9 units. As the rally grew more intense, the protestors raised their arms and chanted “Don’t shoot me”. Chilling to say the least, the scene was reminiscent of Bull Connor sicking dogs on children during the Civil Rights movement, and a grim reminder that all the progress made in “post-racial” America has been backward. 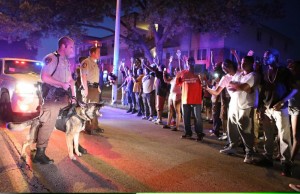 As of this writing, news has just broken that looting and rioting has begun in Ferguson. “Fuck the police”, spray painted on vandalized buildings. The last time I can remember a city rioting and quoting NWA lyrics, L.A. ended up looking like a war zone. Hopefully, eventually, cooler heads in Ferguson will prevail, if only so that the significance of this tragedy is not muddied by the anger of the population. 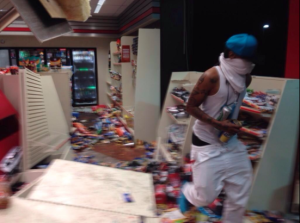 And while we’re on the subject of Mr. Eric Garner, the man who is responsible for actually bringing the footage of Mr. Garner’s murder to the world has been the subject of much controversy this week, as has his wife. A week ago, Ramsey Orta was arrested for alleged criminal possession of a firearm. A few days ago, Chrissie Orta was arrested for an alleged assault against another woman whom had “criticized her husband”.

Ramsey Orta was the first to say that since he recorded the police and was made a public hero of sorts, that the police had been “after” him and his wife. The police countered that claim, by letting everyone know that Mr. Orta had been arrested 26 times for various crimes. Anyone with eyes could see how peeved NYPD brass has become at the elevation of Ramsey Orta, but even more so, by the man they see as a perennial nuisance, Reverend Al Sharpton. According to the Orta’s the NYPD has made their lives extremely difficult, by stalking them, shining lights into their home and other forms of harassment. If true, and it hardly seems to all be fiction, Mrs. Orta was the very definition of bravery when she appeared in a passionate interview with New York’s Channel 11 News.

That is the voice of a woman, who has had enough. For whatever crimes Mr. Orta or Mrs. Orta are alleged to have committed, it hardly nullifies what happened with the officers who killed Eric Garner. That a “career criminal” has become the NYPD’s would-be exposer seems to be just one of the many things that irritate the NYPD union. Stories from the ‘hood of the whistle blower being attacked by the man are hardly new. Hell, the whistle blower anywhere catches a serious amount of hell, but to me the saddest thing about the story of the Ortas is that none of the people who elevated them to public heroes and celebrated them weeks ago, including Reverend Sharpton, has come forward at this time when then need even more defense.

Married Tulsa, Oklahoma police officers Shannon and Gina Kepler have been arrested in the shooting death of Jeremey Lake, their daughter’s black boyfriend. This case, which also is literally the nightmare of any black man who has ever dated interracially and is a painful reminder that some people refuse to allow their children to exceed them when it comes to being progressive and unafraid. 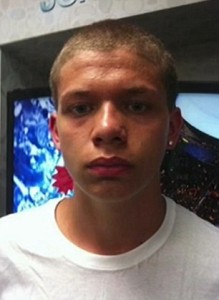 The 18-year-old Lisa Kepler had been kicked out of her home and was living in a homeless shelter when she met 19-year-old Jeremey Lake. Jeremey’s family welcomed Lisa into their home and allowed her to stay there as she got over her troubles with her family. When her father, Shannon Kepler, showed up unexpectedly and found Lisa and Jeremey sitting out front, he became irate. According to Lisa, Jeremey tried to introduce himself to Mr. Kepler, and was shot dead. Mr. Kepler would later be charged with the murder and his wife, Gina, as an accessory after the fact.

What would make two veterans with more than forty years police service between tem commit such a horrible and biased crime? I think we know. We know, though we’ve been told it no longer exists.

This is why people who have lived somewhere for a long time HATE hipsters:

What you’re looking at is a sign that stood outside the Chop Chop Grub Shop on Nostrand Avenue in Crown Heights, Brooklyn. The sign advertises that you “Stop and Frisk your Appetite!”.

I live in Crown Heights, off Nostrand, just a few blocks away from this place. Let me tell you a little something about Crown Heights and Stop and Frisk. The latest stats show more than 11,400 Stops and Frisk in Crown Heights by the 77th Precinct. Guess, if you will, what most of those stopped most looked like – Zac Efron or Anthony Mackie (whom, incidentally, also owns a bar on Nostrand Avenue blocks away from Chop Chop Grub Shop)? The answer is Mackie. Because, frankly, it’s the brothas that get stopped.

But here’s the thing about hipsters: Your everyday struggle as a person-of-color just to get from your home to work without being harassed by cops, is just not a struggle to them. It’s news, but it’s news that happens in “other neighborhoods”. Hipster gentrifiers are rather sure of themselves that they’ve picked “the nice part of town”, while being generally blind that the people that live, breathe and work around them are trapped in a prison of suspicion and being relegated to being the “other” in their own neighborhood. Hipsters living in poor neighborhoods, come from a privilege where they can’t understand the struggle of poverty. Signs like this one, say they are not interested in understanding it. Generally, long-time residents perceive hipsters as insensitive, this only gives fuel to that argument. Still, does the argument change when it’s revealed that the owners of the restaurant look like this? 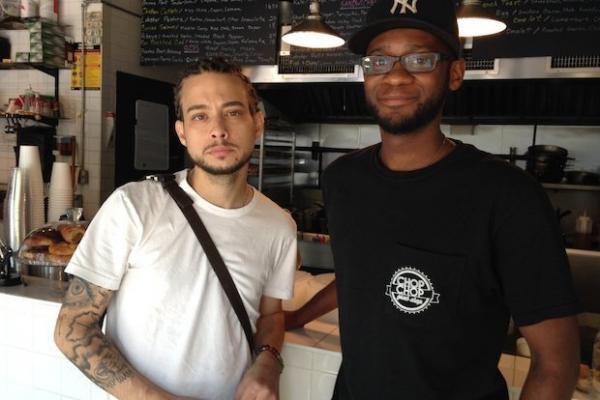 Ha-HA! You thought they’d be two white people! Well, I did, and I’ve eaten there! So what does this mean, because it would seem that my initial argument was about white gentrifiers. But no, it’s actually still just about hipsters. To the credit of the owners, they took the sign down immediately and regret offending anyone in the community. However, I find it dubious that they would be “stunned” by the outrage. Even if your making a folding sign for the sidewalk, Marketing 101 says you want to be eye-catching and maybe a little controversial, especially if you want to keep you hipster cred. Words like “Stop and Frisk” were hardly chosen by accident.

There is a silver lining, however. If Otis Lockett is a black man, and a co-owner of the restaurant, and the co-author of the sign, maybe it isn’t insensitive at all, but perhaps, we’ve found the one brotha the cops in New York haven’t put up against a wall.